Not Just For Teaching Robotics

Thanks to the generous donations of supporters of the Physics Academy, we were able to purchase a new set of Arduino Uno micro-controllers for use in this year’s robotics competition. As I was planning out the unit on teaching DC circuits, I realized that some of our DC power supplies might need to be replaced. I got to thinking – could the Arduino replace these hulking, expensive power supplies? 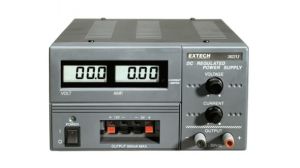 The answer has been (with one caveat) – yes. The above power supplies are nice, no doubt about it, but they are big, costly ($199) and they are not as nearly as extensible as a micro-controller. 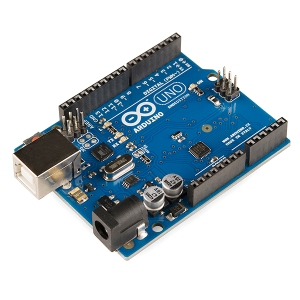 The Arduino micro-controller can act as a fixed 5V power supply, or using its PWM pins, you can vary the voltage from 0V to 5V with a resolution of about 20 mV. The other advantage about using the Arduino is that it gives you a chance to teach a little bit of programming too! In our case, it allows for a great introduction to robotics well before we are ready to start our unit on robotics.

The one disadvantage is that you can’t test any circuits that need over 5V of electrical potential difference, nor can you test things like motors or other higher current (> 40 mA) circuits. We didn’t find this to be a big problem, but if you do, you can actually purchase a shield (an attachment that fits on top of the Arduino) from Adafruit Industries that allows you to use a higher voltage, higher current power supply that is controllable through the Arduino.

One of the first activities that the students do, which is a great activity from the AMTA curriculum repository, is to have the students “map” the voltage between two metal bars that are partially submerged in water.

Using the Arduino as the power supply, the students use a multimeter to check the voltage at specific locations on a grid that is placed under the transparent pan holding the water. These numbers are recorded into a spreadsheet. Excel has a great tool for doing a 3D map of the values.

What results is a really nice visualization of the potential isolines and the spacial variance of the voltage, and thus the electrical field.

We then move from voltage maps to flow model. The students investigate how voltage, current and resistance are related to one another. The students begin by investigating the current flowing into and out of a resistor, and most are surprised to find that the current in the same flowing into a resistor as it is flowing out. They expect that current should be “used up” by the resistor – causing a bulb to glow for example. When they find that this is not the case, they either think that they have done the experiment incorrectly or that perhaps the multimeter is not precise enough. This confusion comes from the idea that they are expecting current and energy to be equivalent. 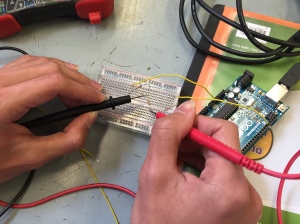 The final challenge for the students is to confront the oddity that is parallel circuits. This is made a bit easier by thinking about the flow model, but the confusion with parallel circuits stems from the idea that a battery is a constant current supplier – which of course it is not. The Arduino, just like a battery, will increase the amount of current flowing from its digital output pins when more pathways are added for the current to flow. This is where I would be careful to make sure however that you don’t approach the 40 mA limit. If you do, you can get some weird results in your observations as the Arduino will naturally cut off current draws around this range to protect its electronics.

The switch to the Arduino has been quite successful, and as stated before, it launches the students into the robotics project with a knowledge that the Arduino is simply a controllable power supply. They learn very quickly from that point on that the Arduino can also act like a voltmeter too! Using its analog input and switching the digital pins to be input pins, the Arduino can also mimic the functionality of a multimeter. If you are considering new power supplies, I would recommend looking into this as an option.