The Senior Projects in Engineering course is a capstone course for the program where senior students identify a project that they will research, design, fabricate and test. This is an independent project that requires self motivation and good time management skills.

In addition to the project, students are also required to develop a relationship with a professional mentor, participate in an internship and also enroll in a college level course.

One of the requirements of the course is to maintain an online repository documenting the progress of the project. This year we have asked the students to use Github, the popular software project hosting service. It has been working out very well. You will find a link to each student’s project below. Please feel free to explore!

Plant Microbial Fuel Cells work by taking advantage of the up to 70 percent of organic material produced via photosynthesis that can’t be used by the plant. I will culture and put bacteria around the roots of the plants in order to break down this organic residue and release electrons as a waste product. However, my mentor brought to my attention that many of these bacteria that directly donate their electrons are possible pathogens, so this will be an area of study and research in order to find an acceptable bacteria. I will also place an anode below the plants and place a cathode on the outside of the box. By placing an electrode close to the bacteria to absorb these electrons, one can use the energy stored in the electrons to power an electrical current and effectively power a device. Researchers say that future systems could generate as much as 3.2 W per square meter, which would allow a roof measuring 100 square meters to supply electricity to a house with an average consumption of 2,800 kWh a year. 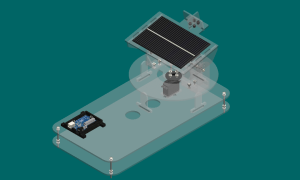 First and foremost, How can I understand the complex system of solar trackers? This is the question I asked myself before engaging in such a troubling task. So, thusly, I thought simply what does a solar tracker primarily do? Well, after some researching I found all it does simply tracks a movement of a light source. Consequently, this is what I have designed.  A simple project with the primary basis of it relying on four photoresistors tracking the movement of a light source through the programming I have uploaded to the microcontroller: in this case being an Arduino Uno R3.

Overall, though relatively simple, compared to other designs this has allowed to greatly understand the immense variety of systems used to track the sun. From live data being feeded into the device, to onsite programmed sensor, this project has also displayed the flexibility of what solar trackers are capable of doing to adapt to their dynamic situations at time. In the end, this arduino solar tracker has been finalized with the following features of having the capability of tracking a light source along a dual axis and the flexibility of being run on differing code. Furthermore, being run on an Arduino Uno R3, varying shields can be replaced in regards to the default sensor shield put on my design to allow for more complex and efficient code.

My project is a raspberry pi server. Unlike the popular dessert, a raspberry pi is a micro pc that runs a custom linux operating system. The raspberry pi is the perfect basis for my server project due to its low power consumption (under 2 watts), cheap price ($35), and prolific use and close following by its extensive DIY community. The core of my project rests within the crontab of the linux operating system. The crontab is a built in functionality of the OS that allows a bash script to be run at user defined intervals. A bash script is any command that can be run by the OS, these can range from saving a file to compiling c code, essentially if you can do something in a traditional visual operating system(like windows 10 or MAC OS X), that and more can be accomplished in the command line interface with more control and efficiency. The bash script that I will be running is simply a command to tell the computer to run a certain piece of ruby code. That ruby code contacts the computer that controls the apt solar inverter. The inverter is responsible for converting the DC current generated by the apt solar array into useable AC power and actually records the amount of power that we collect as it inverts the current. The ruby script asks for all of the information that the inverter has gathered every 5 minutes as long as it is powered. Once the ruby script has received input from the inverter, it takes the data and posts it to the apt weblab website where the data is presented in a cohesive graph and stored.

My senior engineering project is a rocket trajectory simulator I created using Processing, a Java-based programming software. I went about writing my code with the theory of “Agile Software Development” in mind. The fundamentals of this development method involve starting with the most basic version of the final product, in my case a basic particle that can move, and building up the complexity step-by-step until it reaches the desired level of complexity, like that of a model rocket simulator. This method makes a large-scale project seem much more attainable, and provides very reasonable deadline goals (as seen in my project timeline).

My code takes the user’s input of the mass of their model rocket, the combined mass of the payload and the parachute (the parts ejected and recovered from the parachute phase of the launch), the diameter of the rocket, the shape of the nose cone, and the diameter of the parachute.  Because Processing is a highly visual program, I had to utilize a public “library” (code that someone else makes to help improve Processing’s functionality) called controlP5 to manage the user interface. After all prompts are completed, the program simulates the position, velocity, and acceleration of the model rocket using force models of the forces of gravity, drag, and thrust. This process echoes my past two years of education through the Academy of Physics and Technology courses; in class I learned how various forces interact with particles and, through experimentation and theoretical analysis, I discovered how to mathematically represent them. In my Processing program I have a “class” for each force, and within these classes is a theoretical model for the force and a “function” that applies them to a physical body (in this case the rocket). The summation of all of the forces (the net force) influences the object’s acceleration vector, and this in turn affects the velocity vector which affects the position vector. The X (horizontal) and Y (Vertical) components of these vectors are stored every tenth of a second of the simulation, and at the end the first ten seconds are stored in a table. This table is both displayed as a chart at the end of the program and saved to an excel graph to be used for later graphical analysis. Currently the capabilities of my model rocket simulator are simplified and limited, owing to the very complex nature of drag forces, center of mass, and center of pressure, but it is a good foundation that I can build off of in a future project.